JodyPlays released a Hearthstone episode featuring yours truly in a little friendly challenge.
I'm pleased that he sees me as a mentor when it comes to Hearthstone. I don't feel I'm nearly as good as he likes to make me out as, but it's nice to know I can help and provide useful advice.

In return, thanks go out to Jody for his initial call to have his viewers play along on the Fossils and Archeology public server (for Minecraft). Many of us are still close friends and we talk and play games online together pretty much everyday. It's a great community (now called The Lazy Dog) that's been growing a little each day, and it's all thanks to you Jody!
Posted by Shenanigans1930 at 6:19 PM 0 comments

If you enjoy funny Minecraft animations, you should definitely check out Element Animation. Recently, they made light of some big Minecraft news...
I've yet to talk about Microsoft's purchase of Mojang and Notch's immediate departure for two reasons. First, I was pretty surprised when I heard about it and have been trying to collect my thoughts. Second, we'll not know for sure how things will turn out until Microsoft makes any announcements or changes - anything else is pure speculation. That said, I'd still like to voice my opinion at some point and will likely give it more attention in a future post.
Posted by Shenanigans1930 at 11:38 PM 0 comments

A recent Hearthstone patch made changes to both Starving Buzzard and Leeroy Jenkins, removing many of the crazy combos for both cards. To honor the memory of what was, here's a video showcasing Leeroy's best moments.
I find it odd that it took this long to "nerf" Leeroy honestly. The explanation given for the change was pointing most of the blame on hunters with Leeroy + Unleash the Hounds... which was far more broken months ago when UTH was only 2 mana. The wombo combos seen in the video above have been available mostly since the beginning (except for the one using the new shaman card from Naxx of course).

As for other decks that made extensive use of Leeroy, Miracle Rogue was probably most affected by the cost increase. Leeroy + Shadowstep x2 costs 11 mana now, eliminating the combo (short of tryharding with Pint-Sized Summoner... I suppose). Considering that Loatheb and Sludge Belcher are so prevalent (and so good), pulling off lethal burst for Miracle Rogue was already getting tougher. On the bright side, perhaps we'll see some new rogue builds and maybe even a viable Miracle variant.

When it comes to Starving Buzzard, I don't agree with such a harsh change to that one card. Hunter was getting out of hand, but this doesn't seem like the right way to fix things. One of the biggest issues with buzzard allowing players to draw so many cards was the amount of cheap/free answers playable in the same turn from those newly-drawn cards. When you can Buzzard + Unleash and still be able to play another cheap beast or two and any number of Hunter's Marks on top of that, there's a problem. I think a more reasonable change would've been 4-mana Buzzard (with a slight stat increase) and 1-mana Hunter's Mark.
Posted by Shenanigans1930 at 7:50 PM 0 comments

Hobbs Hates ALL the Cards!

Another amusing video from Hobbs worth sharing! 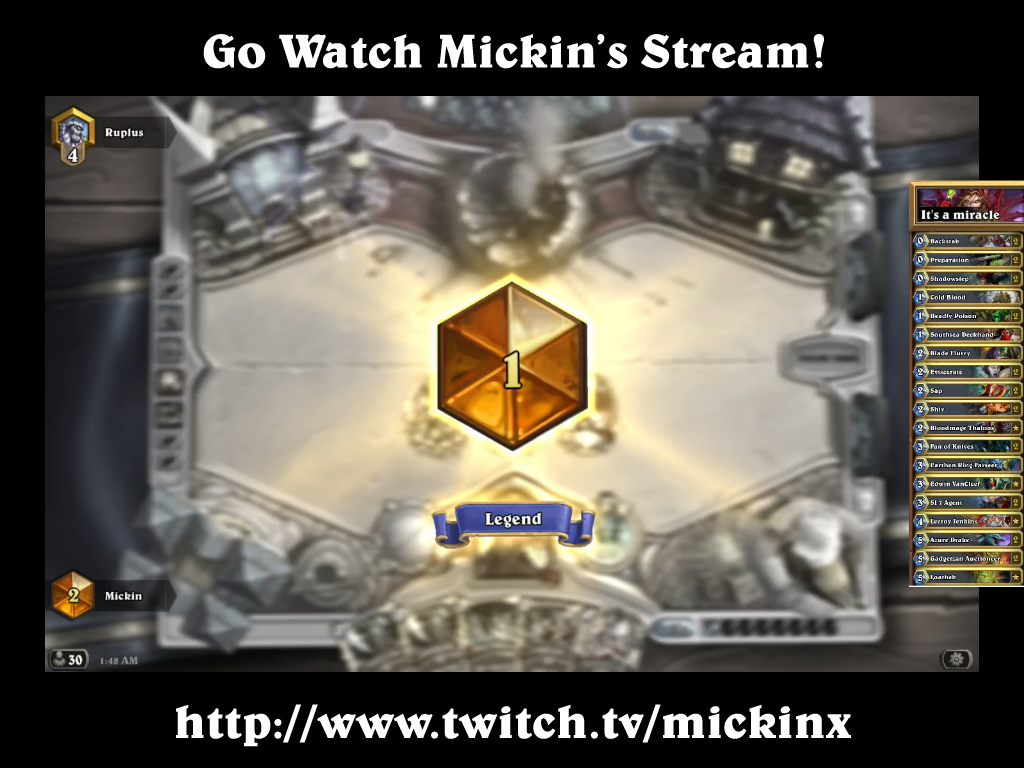 Congratulations to MickinX - one of the most informative Hearthstone streamers around - for making it to Rank 1 Legend (NA) last night on stream! This is wonderful news because he's been away from streaming for months now and about a week ago he decided to try streaming again for 90 days to see if it's worth making a more serious go of it. Perhaps this win will help to get him more visibility.

He's been playing a Miracle Rogue variant that drops Conceal, teching in Loatheb and a Southsea Deckhand for the meta. As you can see, it works pretty well! Here's a link to the decklist - there will be more info on the deck page soon.
Posted by Shenanigans1930 at 5:44 PM 0 comments