We tower up to the ceiling fan for cheese, then proceed towards the grandfather clock again... unless we get distracted by something else, that is.

Fishing, farming, pistons... and waiting for grass to grow, ha ha. The amount of resource gathering to trade with villagers is actually about the same as normal, but it feels more tedious on this map because the trades are larger.

Diversion #2 - Unable to sleep, we climb the giant rocking horse at night. Gravity and zombie hordes attempt to hinder our progress.

Fishing, cooking, and hijinks as we knock out more challenges!

We finish exploring the hallway table and consider tackling the bathroom.

Just a quick pic to show you how silly the graphical glitches still are in Hearthstone. It is still in beta, but the bug seems to keep coming back every time they think it's squashed. For your enjoyment: 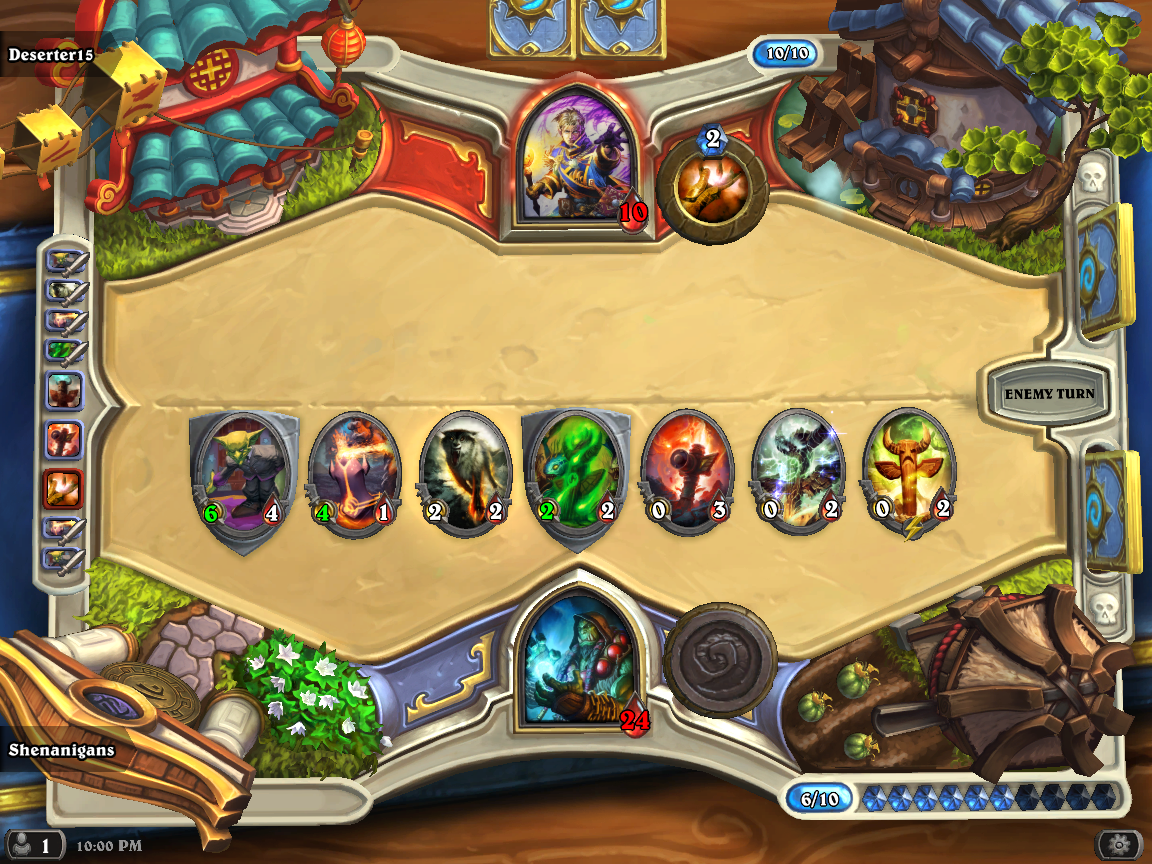 Getting to Legendary For Free

Twitch/Youtuber reynad27 has started a series proving that success in Hearthstone can be attained without spending a penny. His first youtube episode can be seen below.

His deck has zero epics or legendaries, and he's running a Warrior which recently saw some nerfs to its class cards. On Twitch last night, I saw him get to Rank 5 in Play Mode... so it can be done, folks! I highly suggest watching him when you have the time.
Posted by Shenanigans1930 at 3:35 PM 0 comments

We get sugar cane, complete the stairs and slabs challenges, and start building a fishing pond.

Our foray to the kitchen gets postponed as we opt to explore the hallway.

James gets busy in the Nether and finds more hidden chests, we knock out some more challenges, and make a new friend.

Now that Hearthstone is in open beta, there's bound to be a slew of fresh players that could use some advice on getting started. This article (which will likely be the first of many) should help.

Assuming you've already installed the game and played through the tutorial, you're now left with a simplistic Mage deck and little else. Read on to see what to do next.

We take a look at Wellxam's surprise on the desk, then continue towards the kitchen!

If you've been anxious to give Hearthstone a try, open beta is active on the North America servers.

I'm considering doing some videos/articles to help new players get started both for arena and constructed play. Videos somewhat depend on my aging computer's ability to record in-game footage, so no promises there, but I'll try!
Posted by Shenanigans1930 at 3:19 AM 0 comments

We begin breeding sheep and finally determine the "height" of the baby zombies added in 1.6.

We tackle the radiator, finishing the requirements for the bedroom. Now to explore the rest of the house!

We finally get the leather to build a challenge wall (aka to do list), which helped us to knock out our challenges more efficiently. James then adds redstone to our mob trap, allowing us to switch it off and on.

We traverse the bed and uncover the secrets of the alarm clock and the globe!

We turn a profit off rotten flesh to start our cow farm, then start fiddling with our mob trap in hopes of getting rare drops.

We finish the bookcase and admire the view from the top, then consider our next plan of action.

The villager house gets finished, and we briefly discuss comedies and comedians of the early '80s.

This episode we begin to explore the mysteries hidden within the bookcase!

We build housing for us as well as the villagers... and zombies attack!

Underwater adventure and fun with minecarts as we brave the aquarium's depths and make our way towards the bookcase!

We obtain more emeralds, collect resources and grow our farm while waxing nostalgic about Monty Python.

We bring back the cheese from the desk, trash can and plant, then continue on to the Potty Palace and aquarium!

We work our way into the bedroom, checking out the vase, trash can, light switch, and the desk.

There was a mix up, and this episode comes before the one previously posted. We take our first look at the Nether for this map and evict spiders from our mob farm!

We expand our base and talk to the elusive 5th villager who has a couple of perplexing trades.

The hunt begins and we find our first piece of cheese!

We explore the mysterious block at the bottom of the map and collect obsidian to build our Nether portal. Also, we talk about old songs and failing memories. :-P

Here's the start of our new lets play series using "The Great Cheese" map. Wellxam, j boley, and I get acquainted with the rules and prepare for adventure!

I begin work on our house, and j boley finds that all-important second block of water!

Noble and I duke it out in a deviously crafted arena located in the Nether! Imagine a mash-up of Hunger Games and Spleef with trapped chests and admins spawning ghasts and giants. Pure chaos and pure fun!

Gold, diamonds, and (ender) pearls! J boley and I get the mob farm going and collect valuable materials!

I just finished one of my worst arena runs ever as a druid with a horrible set of draft options. It had no Claws, Swipes, or Wraths, and some of the worst selections ever. I was hurting for card draw so bad that I took the freaking murloc that gives both players cards (that and it was up against even less stellar options).

After an insane warlock deck as my first matchup, I fought several paladins and priests, finishing with a personal worst of 2 wins and 3 losses. I was given my obligatory pack of cards and 45 gold, almost making up for the initial cost to enter.

Upon opening my pack, I notice it contains an extra rare... yay! So, what did I get in this slightly more special pack? Trolled, basically. Have a look: 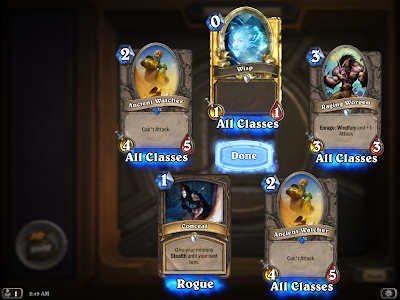 I thought the golden Wisp was a nice touch. Well played, Hearthstone. Well played.
Posted by Shenanigans1930 at 3:17 AM 0 comments