Idle Champions of the Forgotten Realms is an incremental/clicker game based in the popular Dungeons & Dragons setting. While similar to Clicker Heroes or Tap Heroes with its fantasy adventure theme, Idle Champions contains more... everything, really.
Read more »
Posted by Shenanigans1930 at 3:10 AM 0 comments 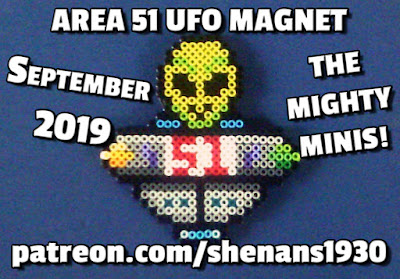 This month's Mighty Mini commemorates (or perhaps commiserates) the brave souls attending the infamous "Storm Area 51" Facebook event scheduled for September 20. This UFO with alien pilot proudly displays the number '51', suggesting it frequents the secluded location and maybe even visits their gift shop!

Made from Perler Mini Beads and magnetic backing, this UFO is ready to land on a locker or fridge near you!

Celeste is a challenging platformer with a surprisingly strong story. As Madeline, you're trying to climb to the top of Celeste Mountain, but the journey is treacherous. There's far more than just rugged terrain to contend with, as it seems that both the mountain and Madeline are haunted.

Almost two years ago, I made a small post experiencing interest in the ambitious undertaking that was Peria Chronicles. Sadly, players were very underwhelmed by the recent Korean beta test and the game was scrapped as a result. Eight years of development and $8 million down the drain. The above video by MMOByte goes into greater detail if you're interested in knowing more about what happened.

I'm not sure I really understand why the game was cancelled after one beta test. It seems that players were unhappy with combat, but I guess the real disappointment was that the beta didn't include any of the creation tools that have been touted as one of the game's biggest features.

For the game's first beta, I'm not sure if we should've expected those tools to be available... that really depends on how much alpha testing was done and if Nexon thought the features were ready to enter the next phase. Obviously, Nexon decided to hold those back and focus on basics like combat.

Surprisingly, the hard pass from testers over tab-target combat was apparently enough to shutter further development entirely. Other games have had similar complaints in their early stages, and developers for those games responded by changing the combat system. One can assume then that either the rest of the game's mechanics heavily depend upon the combat system or that Nexon (for whatever reason) refuses to put more resources into meeting the testers' expectations.

Regardless, Nexon feels it's better to just cut their losses now. That's disappointing as a potential player, because Peria Chronicles seemed to have some promising features. Who knows how far along those features were really developed though? Maybe it's better to be disappointed by the game being scrapped than to have it release and be even more disappointed by promises that weren't delivered. We've already seen our fair share of those in recent years.
Posted by Shenanigans1930 at 6:45 PM 0 comments