I explore early game power options while learning a new mod. Hopefully you can learn from my mistakes!

I learned a lot about the amount of prep time it takes to put together a demonstration video, particularly when you're learning about the content as you go. I feel that these types of videos really aren't my strong suit, so don't expect to see too many episodes in this format. That said, I felt it was worth doing, especially to point out the smaller details of wiring and using the voltmeter properly.
Posted by Shenanigans1930 at 7:11 PM 0 comments

The start of my first Minecraft Lets Play! It's time to go find a place to live!
Posted by Shenanigans1930 at 6:19 PM 0 comments

Storm: Neverending Night is something different, not necessarily good, but different. It's a side-scrolling survival horror game similar to classic Resident Evil. In classic RE, the camera was perhaps the biggest enemy players had to contend with. SNN takes care of that issue, but introduces several others.

For starters, the controls for this game aren't the greatest. The default settings are very clunky, and you'll probably want to rebind the keys right away. That said, the controls themselves take a good deal of getting used to.

Likewise, the UI isn't the most intuitive either. Items need to be combined in a very specific manner, which is quite a hassle. Additionally, you'll find yourself spamming the "pickup" key to grab items hidden behind random things in the foreground. To make matters worse, half of the UI is in Russian.

I couldn't find a save option, so I assume there are certain locations you can save at. That would be fine if you didn't have to go through a number of screens full of puzzles, challenges and dialogue that are necessary to advance.

I simply don't have the patience to give Storm: Neverending Night a real try, and frankly I'm not certain it's worth it.

Also, I'd like to announce a new youtube series, 42Craft, coming soon! It's being setup on a private server with a small group of friends, so I'm certain they'll appear in a number of upcoming episodes!
Posted by Shenanigans1930 at 4:42 PM 0 comments

I should really record more of my Hearthstone experiences. I'm basically a human highlight reel... for Trolden, of course.

I started working on the final League of Explorers wing the other day. Overall, I'm really happy with this adventure - the bosses (particularly the Rafaam fights) are interesting and actually feel like boss fights. Many of the cards added by the adventure have influenced the meta significantly, making it more diverse than ever.

Still, my RNG being what it is, things happen that just want to make you scream. Here's a screenshot of my first attempt at the Rogue Challenge, right before I hit 'Concede'. 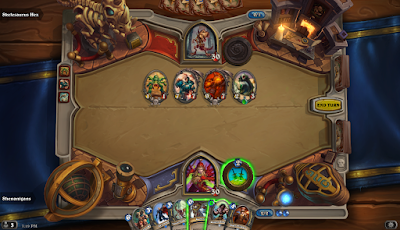 Turn 1 Varian Wrynn into The Beast and Emperor Cobra with a Webspinner played for extra insult? Really?!? Sometimes I hate you, game!
Posted by Shenanigans1930 at 4:49 PM 0 comments

Jade Empire is one of those classic BioWare titles that has a special place in my heart. I remember originally playing it on the XBox many years ago while attending college. I never found the time to actually finish the title and eventually sold the game and console, so I'm really happy to have picked it up again.

This game is a special blend of action and roleplaying, with that familiar BioWare design of story-rich dialogue, character options and solid combat. On the PC, you can choose to play using either a controller or keyboard and mouse. I fumbled a lot using the controller during the episode, way more than I recall doing when playing it originally, so I think I'll go the KBM route when I decide to play this proper. Understand that the controller seemed fine, I'm pretty certain it was just operator error! I did find a few of the standard controls a bit unintuitive though - I kept wanting to use the right analog stick to look around, only to find camera rotation handled via L2 and R2.

My ineptitude aside, Jade Empire is an amazing game that you should go grab on Origin's "On The House" now while it's free!

On a much sadder note, this episode is dedicated to James "AngerPuppet" Boley, who passed away last week. He was one of the best friends a person could ever have - funny, clever, generous and inspiring. If it wasn't for James, this series (and probably most of what I've done in the last two years) wouldn't exist. I miss him every day, and likely will for a long time to come.
Posted by Shenanigans1930 at 4:53 PM 0 comments

I often criticize Blizzard for botched releases, game imbalance and bugs... but today it's time to show some gratitude. As the above video (from Disguised Toast) shows, Blizz has been working to fix bugs and remove inconsistencies in Hearthstone these last couple of weeks. I didn't even realize some of the cards have been reworded to accurately depict the timing of their effects.

In addition, I want to say just how impressed I was with last week's Tavern Brawl - Decks Assemble! While I'm sure a lot of players were confused by the game, any fans of the deckbuilder genre were able to pick it up quite easily, and it was pretty neat. From a programming standpoint, I'm fairly certain that Brawl was one of the hardest to set up. It turned Hearthstone gameplay on its ear, and even cards with potentially problematic effects (like Emperor Thaurissan) worked fairly well. Also, I have to imagine Blizzard had to set up stronger/more servers to handle the craziness of multiple Lorewalker Chos and Nozdormus all in one game!

Kudos, Blizzard, for listening to your audience and putting in a strong effort to keep Hearthstone fun, bug-free, intuitive and fresh!
Posted by Shenanigans1930 at 6:13 PM 0 comments