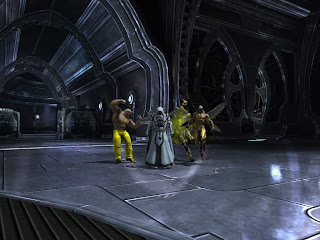 Took a group pic inside the Hall of Doom Armory, just thought I'd share. From left to right - Borgnagar, DeathRattler, Zapot Knave, and Epigean.
Posted by Shenanigans1930 at 2:03 PM 0 comments

Neo Steam Comes to an End

I received the following email today:


Thank you for sharing your time in Neo Steam and steampunking it up with us for the past two years. We take pride in being in the first Atlus Online title and the last-standing Neo Steam server in the world. It's with deep regret that we must now announce:
Atlus Online will shut down its Neo Steam service on February 8, 2012.
Starting today, you and all your friends will be granted the benefits from all previously run server events in the upcoming months of December and January. That means more EXP, more TP, no death penalties, increased drop rates, unlimited Neo Steam, the works! We will hold nothing back in delivering the best Neo Steam has to offer.
If you still have Neo Steam Gears, you will have access to the Premium Item Shop until January 4, 2012. All unused Gears will revert back to Atlus Crowns, ready for use with all current-and yet-to-be-announced-games.
Citizen of Chrysalis, thank you for your support. Let's celebrate together and go out with a bang!
Respectfully Yours,
Atlus Online

This is kind of a shame really, as Neo Steam seemed a decent MMO all around.
Posted by Shenanigans1930 at 1:52 PM 0 comments

I got to raid with my league (guild) last night on DCUO, and it was a blast. It took us a couple hours as it was most of our first time there and Black Adam is a real pain with Giganta's powers! Anyway, I must say the 8-player raids in DCUO are well-done, and Khandaq looked beautiful. Kudos to SOE for doing a great job at giving us a rewarding team-building experience.
Posted by Shenanigans1930 at 2:28 PM 0 comments

Hey there, just wanted to check in with everyone and say that DCUO is for the most part running smoothly now. One thing that really impresses me about this game is the accessibility of endgame content.

During my stint as a WoW player, I could never find the right guild and thus pretty much was excluded from seeing most raids and of course epic gear. I know that has changed somewhat with their new matchmaking system, but when I played I was pretty much on the outside looking in.

It's a little different in DCUO though. Yes, I'm in an active guild (league) who runs stuff together, but the amount of things you can do for progression after the level cap is pretty good. For one, the dailies aren't as mindless and frustrating as WoW's. They are repetitive of course, but it's the nature of the beast.

In addition, you have access to running duos (a 2-player instance) which you can queue up for and be matched randomly or bring a friend of your choice. These are always a challenge and good fun. Then come alerts which are 4-player instances and finally raids which are for 8 players. The matchmaking system for alerts seems well done, as I've yet to join a group that doesn't consist of the proper formula (1 each of controller, tank, healer and dps). On top of all this is the daily bonuses for each of these things, which means more marks to earn your endgame tier gear.

In all, endgame just feels more accessible in DCUO than in some other mmos. Recently, a Combat Rating (gearscore) stat has been added to the game. WHile there have been a few complaints, I think in all this seems like a good thing and helps keep progression on the right track.
Posted by Shenanigans1930 at 1:41 PM 0 comments

Email ThisBlogThis!Share to TwitterShare to FacebookShare to Pinterest
Labels: dcuo

Whether it was the players' complaints or an unintentional bug in the game is uncertain, but SOE announced that the mail system for free to play will now allow claiming of quest rewards. The fixes are as follows:

Players may notice the following changes:

Wow, yet another glaring mistake made by SOE on their new free to play conversion of DC Universe Online.

When you complete quests (missions) in the game, you often get mail sent to you from the contact instead of having to visit the contact for your reward. Often this mail has rewards attached to help your character out. Apparently free to play accounts are restricted from not only sending items via the mail but accepting them as well, including quest rewards.

In essence, SOE is telling their free players to cough up real money or get no quest rewards. This is not an incentive to purchase premium membership, SOE, but quite the opposite. You'll be driving players off by the droves with a move like this. Hell, even Allods Online allows you to access your mail freely and their reputation went down the tubes like two years ago.
Posted by Shenanigans1930 at 10:17 PM 0 comments

Sony Online Entertainment (SOE) pushed back their free to play release of DC Universe Online (DCUO) from the 17th to the 19th of October, then again to November 1st. Their reason for this was to make the change to free to play smoother.

Yeah, well that's going over like a lead balloon.

Downtime for November 1st was 16+ hours long, and most people didn't get to actually begin even downloading the game until November 2nd. Now the USPC server is crashing wildly. Funny - it's called a "megaserver" which was supposedly able to handle the influx of new players... right, whatever. In addition, players frantically trying to login are being hit with a 1500+ waiting line que. What's even worse? Paying customers aren't getting login priority. Yup, paying for the game but you're stuck behind 1100 or so non-paying players to get in.

Good job, SOE. I see that free to play transition pushback really made things smooth. I was thinking about canceling Champions Online for a month and give DCUO another chance, but now I'm seriously reconsidering.
Posted by Shenanigans1930 at 10:04 PM 0 comments

My computer is a little aged, I'll admit it. I know it's not going to play the newer games and I don't have the money right now to upgrade/buy a new one. Still, I've never had a game simply crash my computer like Fallen Earth has.
In the past day and a half, the launcher has stalled numerous times nearly locking up my PC, and once in the game I get to play anywhere from 5-30 minutes at which point my computer shuts down instantly. Obviously the processor is getting overheated and it goes into shutdown mode to save itself from frying out. While it's not the game's fault for me having an older PC, I still don't understand how the game even runs for what little time it does.
While in game, the play is smooth with no lag or hiccups other than the server lag being experienced by everyone. I'd expect the game to be horribly choppy and eventually crash, but no, the game runs just fine and then BAM - shutdown.
The FE forums show no one else complaining, so it seems this is indeed an isolated case and therefore a problem on my end. It's a damn shame too, I really wanted to try this game out, especially with the new free to play option.
Posted by Shenanigans1930 at 4:17 PM 1 comments

Falling off the wagon for F2P

I know it's been a long time since posting on here. I see it as a good thing, as it means I've not been playing many MMOs and have found other things to do with my time. That being said, there's some new free to play additions that have caught my eye.

Fallen Earth just went free to play and is promising quite a lot for non-subscribers. Your only real limits are crafting time and being locked out of global chat, which in all isn't too bad.

In addition, DCUO is going F2P sometime next week. I played in the beta and enjoyed it, and it seems some old MMO friends of mine will be there as well.
Posted by Shenanigans1930 at 1:38 PM 0 comments

So, after much procrastination and deliberation I finally decided to run Therakiel's Temple in Champions Online. I heard a little about the instance already, and was a bit apprehensive - several of the bosses and areas sounded rather difficult to understand - but like I said, I've put it off long enough and it was the only thing in CO that I haven't run.

For kicks, the team decided to run it on Elite - 'oh joy' I thought. Let me just say that the instance was pretty intense, enough to write about it, which I don't normally do for most other in-game material. That said, I learned a lot about it which I feel could be shared, assuming you don't mind some spoilers.

Atari has sold Cryptic Studios - makers of Champions Online and Star Trek Online - to Perfect World Entertainment for a sum of almost $50 million.

The press releases say that things will remain business as usual for Cryptic, but being the jaded gamer that I am, I have my doubts. We've been told numerous fairy tales in the past only to have the rug pulled out from under us and I wonder how this is all going to play out.

Champions Online went free to play earlier this year, which was likely a great feature for PW as they already have a track record in the F2P realm. What worries me is the possibility of Champions Online possibly going entirely F2P with no Gold or Lifetime options. Worse still is the scenario where the game goes into pay2win mode, or you are forced to pay for things that you used to get normally.

It all depends on how much Perfect World is wanting to change how Cryptic handles their games. If they leave well enough alone, things will be fine. The F2P version of CO is pretty much fine as is, and for those that truly enjoy the game it's worth paying for Gold status. If however, PW decides they want to get greedy, the games may suffer.

Here's to hoping that the future is instead bright and sunny. 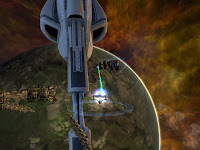 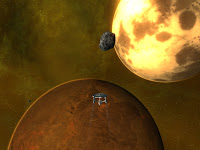