Hearthstone patch 1.0.1.1337, known as the "Elite Skills" Update, will be coming soon™*, and here's the MMOaholic's exclusive previews for the hunter!

Tango Tek strikes again! In episode 6 of "Breaking Bytes", he tops everything he's done so far (which is a feat in itself) and brings waveform displays to Minecraft! Just watch the video and prepare to have your mind blown.

Hearthstone patch 1.0.1.1337, known as the "Elite Skills" Update, will be coming soon™*, and here's our exclusive previews for the mage!

Hearthstone patch 1.0.1.1337, known as the "Elite Skills" Update, will be coming soon™*, and we've got exclusive previews of exciting new features, changes, and cards!

Today Blizzard announced some details concerning the upcoming Adventure Mode that's being added to Hearthstone, and it sounds pretty impressive.

"Curse of Naxxramas" will be the first Hearthstone Adventure, based upon the Naxx raid from WoW. When released, all players will have access to the first of five wings of the dungeon (The Arachnid Quarter). Each week after, a new wing will be accessible for purchase with either in-game gold or real money, the amounts of which have yet to be announced.

The rewards for completing each wing include new cards (including a guaranteed new legendary for each wing) themed around the denizens of Naxxramas. There's a lot of neat Deathrattle-based cards along with some others, all of which look pretty exciting.

(All images courtesy of Blizzard)

But wait, there's more! After completing a wing, you can revisit it with each class to attempt special challenges. Completing those challenges earn you new class-specific cards. In addition, as wings unlock over the weeks of this release, the cards from those wings will start showing up in the Arena card pool. Curse of Naxxramas adds 30 new cards to Hearthstone, which is one of the most requested additions to the game.

Personally, I'm really pleased by this announcement. Adventure Mode has been hinted at already, but the amount of content announced today is more than I expected. New cards, multiple wing unlocks, and replayable content all in one package sounds amazing.

With the relative ease of being able to play Hearthstone for free, I've been wondering how Blizzard was going to be able to financially sustain the game in the long-term (other than cosmetic purchases and new cards). This sounds like an interesting option. I'm sure somewhere people are already crying about "new content locked behind a paywall, making the game pay2win", but they're missing an important detail...

Purchasing access to a new wing doesn't give you new cards automatically (at least from the description in the announcement). You still have to complete it and the challenges for each class. Even if that proves to be simple, it doesn't mean that the cards rewarded will be so powerful that they ruin the game for everyone else. Baron Rivendare seems to be the most abusive of the preview cards (just imagine him alongside Cairne, Sylvannus, Harvest Golem, or even Loot Hoarder), but we don't have all the information just yet. Overall, Curse of Naxxramas looks like a welcome addition to Hearthstone, and I can't wait to try it.

I had this silly deck idea last month based off of "minions taking damage" effects. I originally called it "Popcorn", due to the thought of Leper Gnomes sitting behind an Abomination waiting for it to explode, causing a chain reaction.

This last week, we saw an answer to Warlock Zoo and Aggro Hunter in the form of Contrologist Warrior by Shoctologist. It's an effective deck, but with all the epics and legendaries, it's also pretty expensive to build.

That in mind, I present the Aggrologist. It's a slightly more budget-friendly deck that can also clean up against the aggro-heavy meta. If you notice, this deck plays a lot of similar cards to Contrologist, and at first that was a happy accident on my part.

When I realized that Contrologist was a thing, I actually added several cards to further mimic it. The idea is to let your opponent think you're playing Contrologist, when in fact you're more equipped for rush/burst.

In my tests so far (which admittedly have been Casual Play and a few matches at Rank 17 as I start laddering again), this deck does well against Zoo, Hunter, and even Miracle Rogue. It has a pretty poor matchup versus priests, mainly due to Cabal Shadowpriest and Auchenai Soulpriest (as well as priest's hero power).

So, let's go over the cards and see how they fit!

Execute and Shield Slam are spot removal to take care of big threats/taunts. Try to use them sparingly (especially against late-game focused decks), but do what you have to in a pinch.

Whirlwind is an "enabler", allowing you to Execute something large, destroy a horde of hounds, or proc any number of your minion's abilities. It's best used when you can do several of these things at once.

The lone Abusive Sergeant is there because I have only one Shield Slam and wanted something cheap. Cleave may work well here too.

Leper Gnomes are early damage to whittle down life totals or trade up with. They're a solid choice in most aggressive decks and were part of the basis for this deck

There should be no question as to the inclusion of Fiery War Axe. It removes Grizzlies, Void Walkers, and other obstacles. Heroic Strike performs a similar role, but has the added bonus of surprise additional damage.

Slam is an enabler mainly for setting up Execute (and drawing a card), though it can be used for your minion procs or a straight up 2-damage to kill an opposing minion. You'll notice several sources of card draw in this deck, so drawing from Slam isn't necessarily a requirement.

Amani Berserker, Armorsmith, Acolyte of Pain, and Frothing Berserker are your proc minions. They all like it when things take damage, sometimes even themselves. Take advantage of that.

Cruel Taskmaster serves as both enabler and a small minion, fitting the deck perfectly. Shield Block is card draw and armor rolled into one sweet deal that empowers your Shield Slam and gives you some additional "health" to make up for your weapon attacks into minions.

The last four cards are indeed expensive to craft, but I feel they are vital to the deck's success. This deck isn't cheap, but it's still cheaper than Contrologist.

Leeroy Jenkins is pretty absurd, borderline broken, and great as a finisher. Brawl is likewise really powerful and can clear a board like nobody's business. Black Knight kills taunts dead, and functions as a third far costlier Execute (or an overpriced yeti, depending on your matchup). Gorehowl is a recent addition to the deck, which is used for cleaning up opposing minions while yours run rampant, or providing burst damage to finish the game.

If you actually read the Contrologist writeup, you'll notice that Aggrologist could very well be defined as a "worse version of the other" and I'm not going to dispute that. If you have the dust to craft what's required to play Contrologist then by all means enjoy it. If not, Aggrologist still does well against the aggro meta for the cost... assuming you don't want to play zoo/hunter yourself, that is.

[UPDATE] At the moment, I'm not really happy with this deck. It's fine against aggro, but it really falls short to heavy control decks. I'll be doing more tweaks and tests at some point, but the meta is shifting again (hunters are evolving) and I've neglected ladder enough this month already.
Posted by Shenanigans1930 at 1:09 AM 0 comments

I'm a little late to the party on this one, as this series started back in January of this year and I just recently found out about it (thanks to xisumavoid - a great Minecraft youtuber in his own right). Anyway, Tango Tek has a series of videos titled "Breaking Bytes" where he fiddles around in Minecraft's code to make some interesting changes to the game, all in the name of fun.

As I'm just now starting to learn Java/LWJGL/OpenGL, I found this to be pretty neat to watch. I'll leave the first episode here, and you can check out the rest of the series if you're so inclined. Tango starts things off with a bang as he changes snowballs to be explosive. Enjoy.

So, my friend Mandelsage just sent me a Hearthstone screenshot. How many weird things do you see? 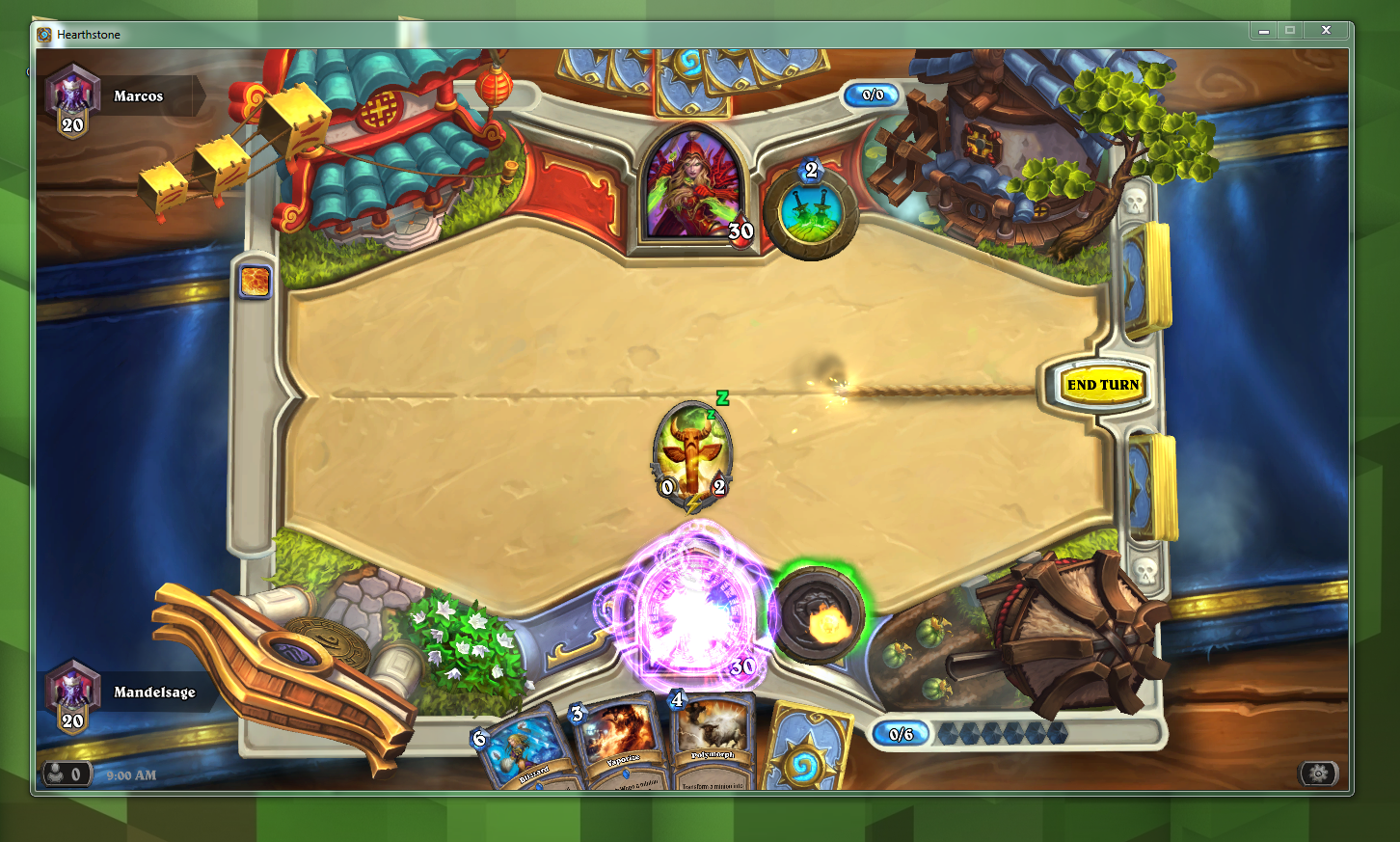 He was playing ladder and started a new game. After choosing his opening hand, the game had him at six empty mana crystals. A wild Healing Totem appears, and he is given a face down card. Mind you he was playing mage and his opponent was a rogue... so where did the totem even come from???

After attempting to use the hero power, the animation stuck at this point. The "End Turn" button was inaccessible, and the game ended in a loss for him.

What the heck happened here? Some kind of weird connection mix-up or something? It looks like he was part of someone else's game. Maybe this is the early implementation of spectator mode or something. ;-)

New Series - World In A Jar

I had the pleasure of playing emcee for the "World In A Jar" series filmed by Wellxam56, AngerPuppet42, and Mandelsage. It's a competitive 3-player variant of the survival map created by GTAwesomesauce with a few neat twists!

Each contestant has their own perspective and strategies for success, so you may want to watch all three competitors' videos to get the full story. Below is the first episode/intro from each contestant and you can follow along by subscribing to their channels if you wish.