I was inspired to turn the poem into a whimsical video, so enjoy!
Posted by Shenanigans1930 at 8:20 AM 0 comments

I sat down to what I thought was going to be a quiet, boring and early night to play a little Hearthstone arena. I was only 33.3% (repeating of course) correct. With the holidays in full swing, I think I'll tell you what happened in poem form.

T'was a week before Christmas
When I drafted a deck
Of epic proportions,
I could tell it would wreck.
The options were top-tier,
The best for a mage.
I knew when I played it
That people would rage.

I crept through the house
To find someone to tell,
But they were asleep
And my friends were as well.
So I sat at my PC
And began to play.
Blew through two opponents,
This deck was OK!

I battled a priest that
Thoughtstole like a boss.
He had me out-valued,
The game was a loss.
I tried to keep calm
As I gained some more wins,
But this deck was so brutal
I started to grin.

On Argent Commander!
On MAX and Sunwalker!
On Yeti and Kodo,
And a lone Gilblin Stalker!
It wasn't just minions,
I had lots of spells.
Two Frostbolts, two Polys
And a Fireball as well!

Three pretty secrets
And a Mad Scientist.
I can tell you for certain
This deck will be missed!
So I relished the games
As I trampled each foe,
Playing calm and collected,
Wins started to grow. 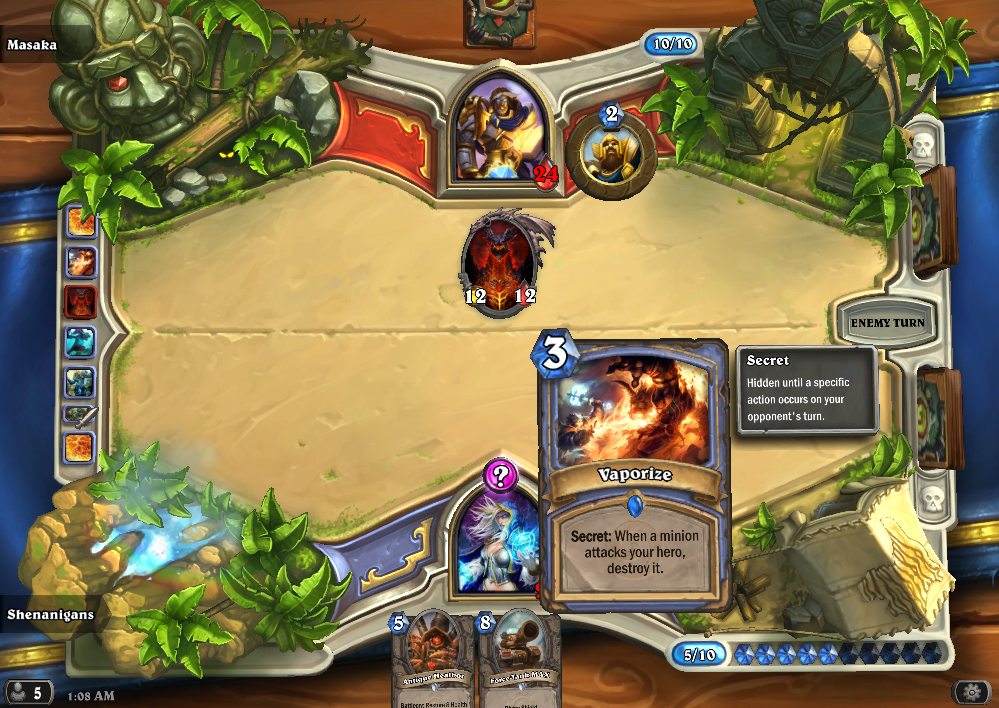 I took on a pally.
The game was big-league,
But when push came to shove,
Jaina died to fatigue.
Twice I saw Deathwing,
but I had a surprise.
Mad Scientist's deathrattle
pulled out Vaporize!

My final two matches
Were against old Garrosh.
One was so close
It was almost a loss.
I won the twelfth game
And I stared at the key.
So glowy, so showy,
And waiting for me!

I reached for the mouse
When I stopped with a thought.
The voice in my head said,
"Better take a screenshot!"
Then I opened my winnings
And shouted with glee,
"May you all draft a mage
And have great RNG!" 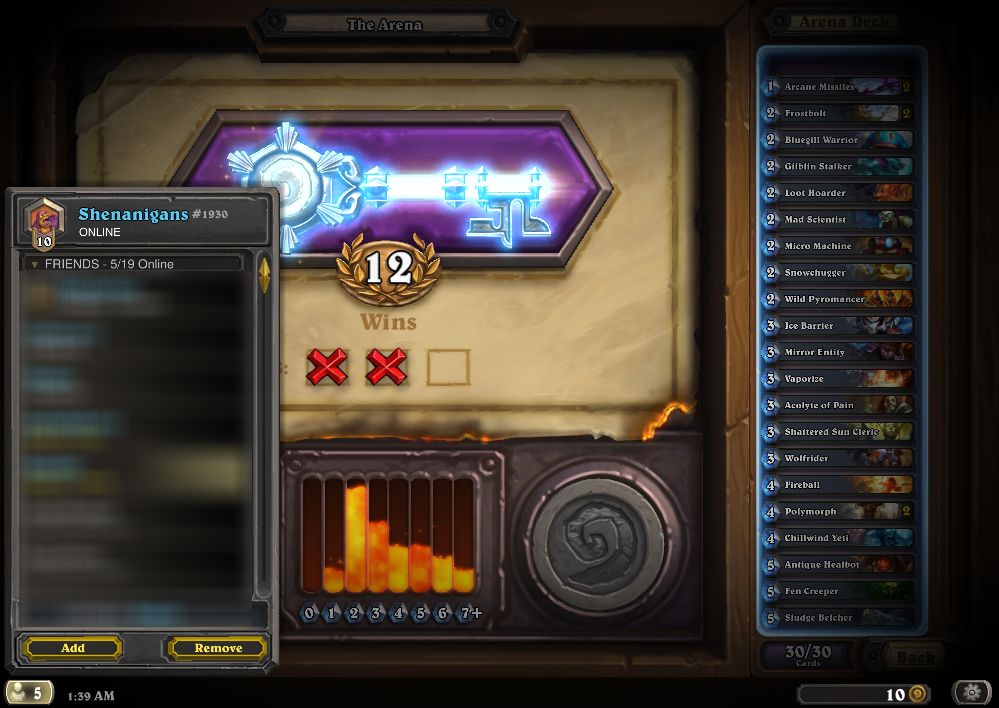 [UPDATE] I turned the poem into a video which you can see here.
Posted by Shenanigans1930 at 3:23 AM 0 comments

Hearthstone became an instant hit for Blizzard when it debuted, but it seems like even more people are flocking to the game with the release of Goblins vs Gnomes. Over the last few weeks I've had a number of friends finally jump into it for the first time that normally wouldn't even look at a card game otherwise.

While it's great to strategize and play alongside (or against) friends, there's a definite learning curve involved that new players need to pick up early before they get frustrated and give up. Thankfully, there are resources for fledgling Hearthstoners freely available online (and I've listed some of them on the Hearthstone page of this very blog).

One of these resources include a tutorial series of sorts by none other than Trump, where he explains different aspects of the game to improve your play. I feel that players new to card games should really watch these videos so they can get a grasp of the more important concepts - it's worth the time. What's more is that Trump even uses basic cards that anyone has access to, so players won't feel pressured or intimidated to "need" a bunch of rares, epics or legendaries to be successful.

New players, this one's for you.

A friend of mine suggested I do a spotlight video of my pally mech deck, so here it is!

Owning GvG On a Budget!

Kripparian posted a new video today showing cheap and effective decks using the new Goblins vs Gnomes cards. People can complain that the decks are face/rush/zoo cancer, but these are excellent options for new or budget players.

Additionally, these decks are new in that over half the cards come from the GvG set. I've been checking out other popular streamers/youtubers, and the majority of them are playing the same old decks with 2-5 new cards swapped in. It's a "safe" option, but it's also rather boring.

I think Kripp put it nicely when he said players can either build cheap aggro out of the new cards or netdeck an expensive old control list. Both are pretty valid options right now making it a good time to be playing!
Posted by Shenanigans1930 at 5:03 PM 0 comments

So, that deck I posted yesterday is doing exceptionally well on ladder. Mechwarper is indeed ridiculous and I'd be surprised if a nerf doesn't come soon (reduced-cost mechs are OP).

I finally got to go against handlock today and admittedly got extremely lucky but was able to overcome double taunted giants (twice) and Jaraxxus. Likewise, control priest was a long game but I survived double Holy Nova, a (Thoughtstolen) Consecrate and other Anduin antics because Jeeves lets you replace your board.

I saw a good deal of deathrattle hunter and Classic/Naxx-era zoolock today as well, beating them too (though most of them were very close games). There's no doubt about it, mechs are the new cancer of Hearthstone... deal with it.
Posted by Shenanigans1930 at 10:40 PM 0 comments

The new cards from Goblins vs Gnomes has made for an interesting meta on ladder so far. There's supposedly a resurgence in both handlock and control warrior, though I've run into far more priests, mages and rogues. I've barely seen hunter and it seems like shaman is dead again. Paladin has a number of great new cards now and actually seems playable (Muster For Battle and Quartermaster are both cool).

I wasn't fortunate enough to get most of the good pally cards though, so I started tinkering with the new mechs (see what I did there). After seeing all the low-cost mechs and the Mechwarper it was obvious that a swarm deck was worth a try.

My first choice for a mech-centric deck was warlock for card draw and burst damage. That might still be viable, but the class mech costs 4 and hard removal is expensive. Additionally, Jeeves can often cover card draw making the warlock's hero power a bit less useful.

Paladin seemed like a strong choice with Truesilver Champion for mid-range removal and Equality to answer game stoppers like Mal'Ganis. The hero power is often more relevant too for trading with Equality and getting extra juggles, so here's the current deck. I've recently swapped out Spider Tanks for Aldor Peacekeepers. They often make for great tempo plays early on and can help slow down huge threats later. Initially the deck included Abusive Sergeant, but I pitched them for Consecrate (mainly to combo Equality, but useful on its own too).

In any case, my success with this deck has been pretty good and it's ridiculously easy to play. On ladder, I've out-valued zoolock, outpaced rogue, and often rushed through secrets mage with little trouble. Facing control, it often depends on how good of an Equality you can get, but that's the way it goes.

Mulligan strategies are easy: ditch anything that costs 3+, though Harvest Golem can sometimes be kept. Play Mechwarper early if you think the opponent doesn't have an answer, otherwise Knife Juggler or Micro Machine is a threat on board that needs removed immediately (and will likely allow for Mechwarper to go unchallenged next turn).

I think Mechwarper's going to get nerfed soon because it's just dumb how good it is, especially since most mechs are already relatively well-costed (and there's tons of cheap ones). Overall, this deck feels about as cancerous as Face Hunter back when Buzzard and Hounds cost 2 mana each. I almost feel bad for playing it, but since it seems like shaman got the short end of the totem this expansion I guess it's back to cancer rush... until I get bored and finally make a mage deck (don't hold your breath though).

Opening 40 Packs of Goblins vs Gnomes (For Real)


Things seem to be working on the NA servers (though EU has been experiencing a similar rough release) so I dump all my gold into buying packs.
Posted by Shenanigans1930 at 10:55 PM 0 comments

Which brings me to a more serious topic - when will Blizzard learn from their years of past launches/releases and finally roll out something correctly? Last week they dropped the GvG cards into the arena mix and everything looked like it was going fine. Now, if you're lucky enough to even login to BattleNet, you might not be able to play... let alone actually buy packs or get to the arena. I can overlook a slight hiccup and a small extended maintenance, but really Blizz, get your act together!
Posted by Shenanigans1930 at 12:52 AM 0 comments