Now that Hearthstone is in open beta, there's bound to be a slew of fresh players that could use some advice on getting started. This article (which will likely be the first of many) should help.

Assuming you've already installed the game and played through the tutorial, you're now left with a simplistic Mage deck and little else. Read on to see what to do next.

Before you can build a deck using a certain hero, you must first unlock that class by winning one game against it. This can be done easily via the Practice Mode as the AI for the Innkeeper is honestly pretty bad.

If you're feeling adventurous, you could try going against other players now, but your progress will be much slower. The basic class decks are sparse on options, meaning you're at a disadvantage from the start. Additionally, you have no choice over your opponent's class choice in Play Mode, so it could take much longer to unlock the last few classes. Your reward for Play Mode is 10 gold per three wins which is nice, but not necessarily useful at this point.

BONUS!
Unlocking all the classes earns you 100 gold.

Just unlocking a class isn't quite enough to play it effectively. You're missing a number of basic (but critical) class cards that can only be obtained by getting that class to level 10.

BONUS!
Getting at least one hero to level 10 earns you one free pack of cards.

If you've already unlocked all the classes but you're not quite ready for Play Mode, switch the Practice Mode decks to the "Expert" setting. These decks include some rarer cards to up the difficulty, but still suffer from a basic AI.

If you haven't played at least a few games in Play Mode yet, now is the time to do so. Use one of the premade decks or build your own if you wish - you simply want to complete three games (win or lose).

By now, you should've seen something like this pop up on your screen. 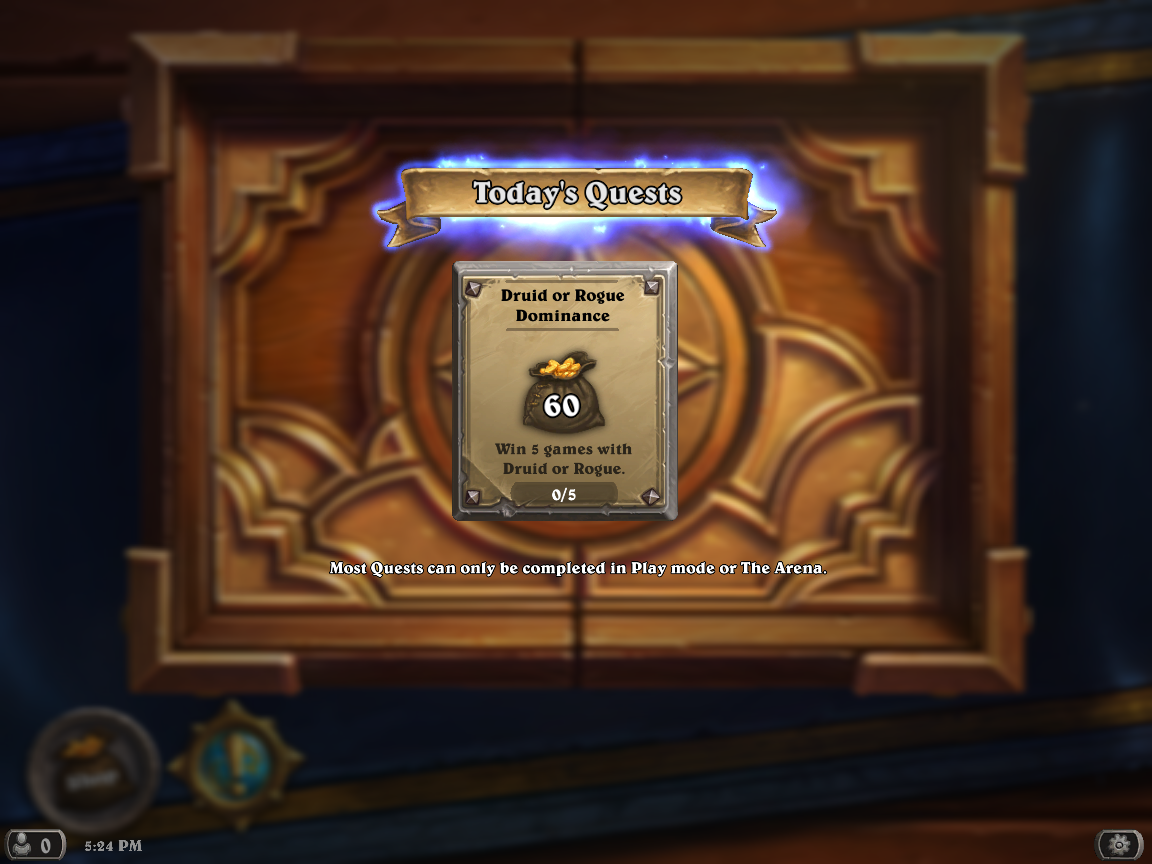 This is a quest, and you get one per day. You don't have to complete it right away, but you can only have three quests at any given time.

If  you don't like a particular quest, you can cancel it in hopes of getting something else. You can only do this once per day as well, so choose wisely. If you really have no interest in completing a certain quest, you can abandon it entirely but you won't get a replacement quest until tomorrow.


At this point, you now have two packs of cards (which you can readily open at any time) and at the very least 300 gold. You could spend that gold on packs right away, but I suggest holding on to it until you decide which route(s) you'll be taking to obtain more cards.

There's four options available with their own pros and cons. You'll notice that these choices involve spending either time or money, and it's the way free-to-play games operate. If you lack one, you lean towards the other.


Personally, I have more time than money and I enjoy the random element of Arena (even though I sometimes curse it), so I default to option 3. Arena can be very profitable and enjoyable, and in an upcoming article I plan to give you more advice on how to succeed in that style of play.

Update: What About Naxxramas?

When this article was originally written, Hearthstone was still in beta. Curse of Naxxramas wasn't even announced yet, though inevitably we knew that more content and cards would be available later. Curse of Naxxramas (and future releases) add to the options available to players (which is great), but can be a bit overwhelming if you're still new to the game.

So to get to the point, is it worth immediately saving up for Naxx (or other adventures) as a new player? The short answer is likely no, because you have to beat the bosses to unlock the cards. The longer answer depends on how important the rewards are to you.

Some of the bosses are tough to beat even if you already have a decent collection - new players with less card options are going to find some of the fights almost impossible. If you really want to challenge yourself, by all means go ahead... but don't say I didn't warn you!

Curse of Naxxramas is a decent investment (at the time of writing, it's 700 gold per wing or about $7 US each), though the rewards are nice. Each wing adds roughly a dozen cards to your collection which are strong but often require other cards to be effective (Undertaker and Mad Scientist are prime examples). There are a few great standalone cards (Loatheb and Sludge Belcher spring to mind), but you'll probably want a nice foundation to work with first.

In most cases it's best to get more familiar with Hearthstone and figure out what type of deck(s) you want to start with. Work towards getting the cards to compliment your deck(s) first, and unlock Naxxramas wings when you have the gold or money to spend and you think you have a reasonable shot at completing them.
Posted by Shenanigans1930 at 6:41 PM