Run to the Hills, Run For Your Life! 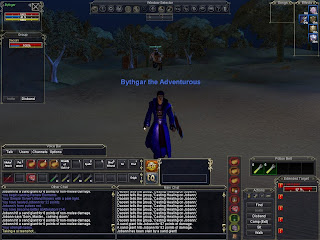 This is a fine example of the exciting things that should be possible in your MMO. I was in the desert of North Ro doing a quest (killing snakes, spiders and scarabs) when all of a sudden I'm stunned and my screen is blotted out by a large white shirt.

A sand giant spotted me and thought I'd make a good snack. Being a magician, my elemental came to my aid, and it was immediately clear that I stood no chance against this behemoth. I made a tactical retreat (aka I ran like a scared kid) to the nearest city for protection, with the sand giant chasing me the whole way.

He was a lot closer earlier, but I thought I'd better get some distance before taking time to snap a pic. Yes, I could've died quite easily and were it not for a speed buff he'd have caught me. It was a great thrill though and offered a fun diversion from the relatively mundane quest.
Posted by Shenanigans1930 at 4:58 PM